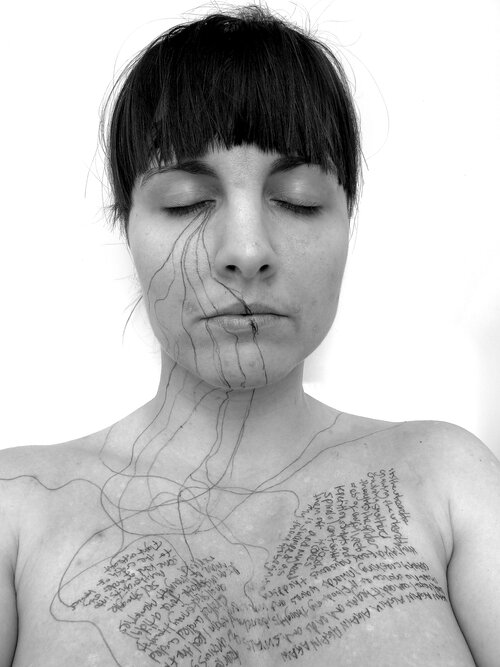 Compulsive Skin Picking dominated her life for more than 20 years, but through a background in dance and theatre, she confronted the condition to harness creative repair and recovery.

Liz Atkin is a visual artist based in London. Physicality underpins a creative practice with her skin as a primary source for corporeal artwork and imaginative transformation. Compulsive Skin Picking dominated her life for more than 20 years, but through a background in dance and theatre, she confronted the condition to harness creative repair and recovery. She creates intimate artworks, photographs and performances exploring the body-focused repetitive behaviour of skin picking. Liz has exhibited and performed her work in therapeutic settings, galleries and venues in the UK, Australia, USA and Japan.

Liz is an advocate for mental health and Compulsive Skin Picking (dermatillomania) in the UK and around the world. Liz speaks publicly about her experience to raise awareness and reduce the stigma and shame surrounding this condition. She has spoken at conferences and featured on Tedx, BBC News, Huffington Post and Woman’s Hour, amongst others.

“My experience of skin picking started from a young age. The illness wasn’t actually diagnosed until my early 30s, by that point I’d been picking for the best part of 25 years and it was only through internet searches that I realised it had a name. I found the behaviour soothing – it would block out tension, anxiety and uncomfortable emotions as through picking, and I’d hit a ‘zoned-out’ sense of calm. It developed into something I did subconsciously so there were hours where I would be picking my skin without really thinking about it. The disorder became a private vicious cycle that totally dominated my life behind closed doors. My body was littered with wounds and marks beneath my clothes. No one knew about it. I took care to mask and hide the illness and behaviour from those closest to me, wearing clothes that concealed the parts of my body covered in scabs and scars, making excuses and using make-up on my body to mask it.

I began to document how, when and where the illness took place and I began to recognise patterns. When I felt the urge to pick I tried to turn it into something else, something creative. Drawing, especially with charcoal, has become one of my greatest tools for recovery“

Before the Covid-19 pandemic, she gave away more than 18,000 free #CompulsiveCharcoal newspaper drawings to commuters on public transport in London, New York, San Francisco, Singapore, Cologne and more.

Raise money for us by taking part in Nightrider

Parliamentary Inquiry on the impact of body image on mental health

The Mirror shines a light on BDD

‘The devil is in the detail’